Pareos and Sarongs: How Could Something So Simple Be So Gorgeous?

It was early June in 1989, and I was just married.  My husband had planned the most wonderful honeymoon for us.  It was a trip to Tahiti.  We visited three islands:  Moorea, Bora Bora and the island of Tahiti which is where the capital, Papeete is.

Tahiti is below the equator.  So, winter, rather than summer was approaching. The days were quite short at that point. But because of its location, the outside temperatures were delightfully moderate (in the seventies).

Our first stop was Moorea. We stayed in over water bungalows at the Sofitel Moorea hotel. 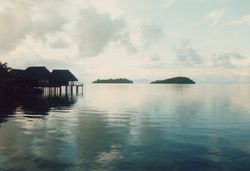 We were greeted with beautiful  wedding pareos and flower crowns. 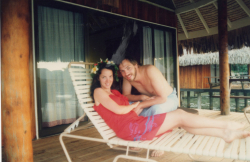 Pareo is the Tahitian word for a wrap-around skirt.  Today, the word is used for any material that is wrapped around the body.  A sarong is basically the same thing.

We were greeted with another pareo when we arrived at Bora Bora.  These were white pareos which were made out of cotton.  It was a great cover up for my swim suit as well as a nice wrap for over the shoulders after several hours in the sun. 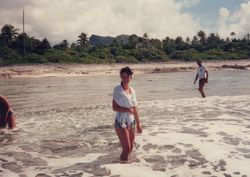 A pareo is so much easier to deal with than regular clothes and when you fold it in half and wear it as a skirt, it's so much prettier and more flattering than shorts.  Not to mention, a lot cooler because the material is lighter.

These pictures were taken  on the coral reef ring that surrounds each of these islands.  They've been there so long, there is often a lot of vegetation.  Beyond these reefs is, of course, the Pacific Ocean. If memory serves, its about 4,000 feet just beyond the outer edge of the rings. 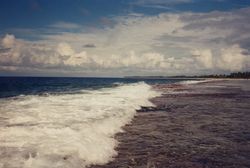 The lagoon that is created between the island itself and the coral ring is only a few hundred feet deep and its filled with lots of colorful  tropical fish. If you have sufficient canoeing skills and can figure out how to stay clear of the currents that exist where the coral rings have breaks, you may be able to make your way safely around in an outrigger.  This can be a lot of fun!  Many parts of the coral ring surrounding the Tahitian islands have long stretches of magnificent beaches, which you can have completely to yourselves! Nothing like a romantic picnic lunch on a completely secluded, beautiful beach.  This can also become a nightmare if you don't know what you are doing.  For example, these currents can both prevent you from getting to a destination or getting back home.

More recently, I have discovered sarong buckles made out of coconut and mother of pearl.   And there is one particular tying technique that transforms  a sarong into a gorgeous and very sexy wrap sun dress or bathing suit cover up.  It's surprisingly simple.  You place the longest side of the sarong behind you just under your arms.

Hold the material by the top two corners and pull to the front.  For a moment, hold both corners in one hand. Hold the coconut buckle in front of you with the other hand.  Place the top left and right corners of the material  through the left and right holes of the buckle.

Here is a video of the sarong tying technique I described in the last blog post.

I'm not exactly sure why, but  I have always bought scarves  that seem to reflect how I feel or want to feel inside: happy, beautiful, vibrant, and special.    Certain ones seem to be so perfect year after year for those formal important things like job interviews or weddings.    But, I also like to wear particular scarves for fun, casual things, like apple picking in October or going to a surprise birthday party.  Wearing a scarf is uplifting for you and sometimes even for the people you are with!

It's not that different for me when it comes to music.  I listen to music that reflects how I feel or want to feel inside.  So what I like in music is pretty distinct and diverse.   I am crazy about:

Music in particular is so powerful when it comes to being able to affect how you feel.  I can have the most draining day at work.  But on the way home, if I listen to a piece of music that is hopeful, energetic, and/or positive, I'm just about guaranteed to be heading in that direction by the time the song finishes.

My dad studied music at Boston University, both voice and instrument (clarinet). He taught music  in public schools to children for many years in Massachusetts and Maine.  Although I learned to play flute and piccolo in the 1970s (and here I am in this concert photo- the flautist in the striped shirt),  I have minimal skill. 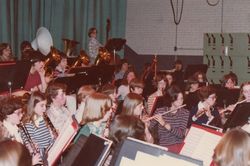 My sister Sharon sings and directs choral music and teaches music to elementary school children at a private school in New Jersey.  She went to Westminster Choir College, has sung at Carnegie Hall a couple times and sounds like Jessye Norman. It's such a gift!  The next generation of children in my family could yield a couple musicians.

And if not, we'll make sure they will know how to enjoy and use music as much as their parents do.