The Seduction of Steam Locomotives 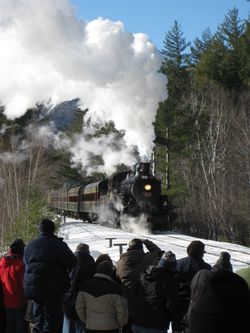 Have you ever been on a train?  How about a steam locomotive?

I first experienced  steam locomotives as a child in eastern Massachusetts. Those of you who live near or visited Boston or Cape Cod may be familiar with the place that has them.  It's called Edaville Railroad.  It's one of the oldest heritage railroads in the country.  It's a 2 ft narrow gauge line which operates excursion trains around cranberry bogs.

Even in a standing position,  a steam locomotive with its engine running  over powers the senses.  You become completely enthralled.  Somehow you  sense the raw power of the thing.  When you think about when it was invented, you realize  the sheer magnitude of the technology.  It  had played a very major role in changing (and improving) the way human beings  live.

The US had started to  use steam locomotives in the late 1820's.   The South Carolina Railroad was the first commercially successful railway. In December of 1830 the inaurgural train was hauled by The Best Friend of Charleston steam locomotive.

Diesel electric locomotives appeared in the mid 1930s. Diesel reduced maintenance costs dramatically and increased locomotive capacity.  A new diesel locomotive could provide perhaps   350,000 miles a year vs. approx. 130,000 for a  steam locomotive. The switch over to diesel was slow in the 1940s because of World War II.  The rate of replacement increased in the 1950s.

Here are some pictures from  the most recent time I saw a steam locomotive (Winter, 2009).

Steam locomotives are  very special, truly wonderful things.  Seek them out to see for yourself!

Posted at 02:45 PM in WB- In Transportation | Permalink