« Frozen Banana Chips Can Take The Place of Ice Cream | Main | How Lipizzaner, Andalusain and Lusitano Horses Are Related » 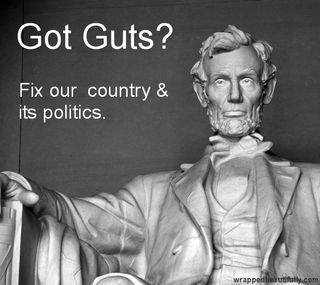 Here are my six suggestions for how we might be able to fix our country and its politics:

Note: These thoughts are rough around the edges and need to be challenged and refined. I believe, however, it's this kind of creative thinking that can allow us to solve our incredibly serious problems.

First: Toss all Political Action Committees (PACs). Elected officials must fairly represent the wishes of all individuals not the wishes of only the very wealthy and corporations.

Second: Have term limits (only one) so we can avoid the problems that come into play with reelection campaigns. And limit all campaigns to a specific, very nominal yet appropriate budget which only the government supplies.

Third: Require federal fiscal budget to be balanced (via a constitutional amendment) every year. Want to understand our fiscal budget deficit better? Read this.

Fourth: Replace our overly complicated tax code with a simple flat tax. I think Ross Perot proposed 17%. And Forbes is doing the same now. It's fair for everyone.

Fifth: Because our annual spending is 3.83 trillion, there is no simple and easy solution for paying down this black hole of a national debt we have created for ourselves. Even if we were to throw a full 25% of our annual spending or upwards of 1 trillion dollars at this, annually it would take over 15 years to pay it off. And, I know that we are not in a position to do that, not even close. So, here is some really out of the box thinking, that needs more consideration and certainly constructive feedback from you!

Legalize marijuana. According to NOML (which has a site by the same name), Marijuana is the third most popular recreational drug in this country (alcohol and tobacco are ahead of it). Approx. 100 million Americans have used it at one time or another. Approx 25 million Americans have smoked marijuana in the past year. And approx. 14 million people use it regularly.

NOML also says marijuana is a lot less dangerous than alcohol or tobacco. About 50,000 people die each year from alcohol poisoning. And over 400,000 deaths each year are attributed to tobacco smoking. Contrast this with marijuana which is considered to be nontoxic and cannot cause death by overdose.

Business Week's web site has an article: Legalize Marijuana for Tax Revenue. It starts with "The entire U.S. should follow California's lead—introducing referendums to make marijuana legal, thereby putting the current criminal drug producers and sellers out of business and enabling government to collect tax on pot sold via legitimate channels."

Want to know more about our national debt? Read this.

Sixth: Have a viable plan to go back to the gold standard (or something similar). Printing and spending money that is only backed by gold (vs. nothing) will let us reestablish and maintain the integrity of the dollar.

We do not want to loose our international dollar standard. A number of sources believe that this is at risk now, because of our seemingly "out of control and irresponsible" printing of US dollars. It appears that if we loose this standard, we loose control we've been enjoying since the early 1970s. Here's more info on the international dollar standard. Loosing this could all by itself drastically and negatively affect our quality of life going forward.