« Does Your Life Reflect Your Core Values? | Main | If You Feel Beautiful You Will Be Beautiful »

COVID19 Testing Incomplete & Misleading If Don't Use One of These Techniques

Covid19 testing is incomplete and misleading if we are not (1) getting a baseline of a complete population or (2) taking true random samples of populations whether those are at the state or region/county level.

When you consider what President Trump and the state governors are planning in terms of how the states will open up using three phases, its crucial that they are working with valid data about what a given state or parts of it are dealing with at a given point in time.  Either you take a full baseline of a given population (everyone in that population) or you take true random samples (which let you characterize the population somewhat accurately). And, it would be best to know these 4 things:  (1) who has not had it, and of those with it, (2) is it active or (3) inactive now?  And, (4) did they have symptoms when it was active?

I just put these numbers together for New England and NY and NJ. 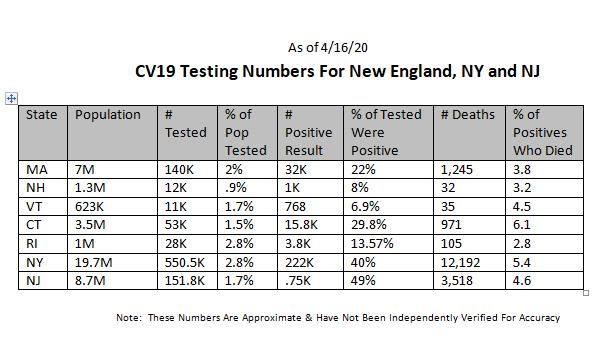 As you can see, the percentage of people tested in each of these states ranges from only .9 % (NM) to 2.8% (NY and RI).  In all cases, we are running essentially blind.  How is that?  Well, in all cases, the data being used is  not a full baseline and its not random samples.  So, for example, MA has not tested 98% of its residents.  And the 2% that it has tested is mostly the symptomatic people.  We believe at this point in time that a fair to significant percentage of folks who are asymptomatic are actually carriers! They are NOT being accurately reflected in these numbers.  If there was a full baseline of tests or valid random samples, they could be.

We know that we don't have the testing capacity in place to take full baselines of populations right now, in highly populated states at least.  So, we must take valid random sample baselines. I have not heard that any state has done that (at least yet) even the states with much lower populations. If this is not done, our economic openings will be both poorly and invalidly planned and therefore executed and set backs (delays in opening a region or state)  will likely be rampant.